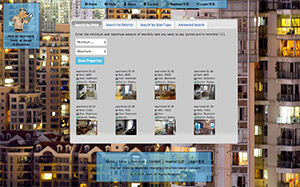 Visit the site:
www.ApartmentForRentInShenzhen.com
This website is a totally free and open platform built for expatriates living in Shenzhen. There are quite a few expats (perhaps even the majority!) who don't have the requisite Chinese language skills to do deal effectively with the problems involved in both searching and concluding a contract/lease to rent an apartment. I saw that the existing websites most expats were using really were not geared specifically for searching for apartments (i.e. they did not have adequate search functions or were owned entirely by just one real-estate company, normally a Chinese company (and thus not "open" as such).

This site involves a substantial amount of low-level graphics/image processing code (using PHP's gd extension for image manipulation). If fact, I wrote over 300 lines of code related image/photo processing for this site. Among the features/functionalities my server-side code provides with respect to image processing: a) uploaded photos are checked for size and correct format, b) image sizes are reduced/changed, c) image quality levels are adjusted, and d) users can rotate their photos in the event that they display an incorrect/unexpected "landscape" or "portrait" layout. I wrote code which allows users a) to preview their uploaded pictures, and b) to rotate their uploaded pictures any way they want should they find that the orientation is not to their liking.

When one expects large files to be uploaded by users (and/or large numbers of files) it's important to exert some checking and control over this user-behavior. This is due to a number of reasons but the first is the effect it can have on page-load times when a user (in this case a landlord or agent) uploads a very large, let's say 2 megabyte, file up onto your server. When someone goes to view that particular apartment listing/page it will substantially increase the amount of time that visitor will have to wait for the whole page to laod in their browser. For obvious reasons this is bad! Due to certain changes made by Apple to their built-in picture-taking app that comes standard on all iphones, user photos contain a particluar byte pattern in them which changes the layout orientation from portrait to landscape when it didn't do that before in the past. It does not always occur, however, I tested it myself and under certain conditions it does happen. For me it was about 50% of the time (I've forgotten if it was when you start in portrait layout or vice-versa). This is unacceptable, yet very hard to fix. The result is that many small business owners whose websites use old scripts (and naturally this includes many "canned", do-it-yourself content management systems) have unknowingly put themselves in a sort of "self-help" pickle. This happened because they needed more than just a "blog", didn't realize that, and went on to create their websites themselves without being fully-fledged programmers. This is understandable, yet it does not have to be the outcome in your case.

This apartment website is also mobile-friendly and tenants/landlords/agents have no problem using and viewing it on their phones.

I just launched this recently: early January 2017. However, I had done some initial planning and preparation before setting it open to users. I had spent a number of months developing the SEO aspect of the site based on keywords such as "apartment in Shenzhen", and was on the first page of Google's search results (and further I could see from my server-side scripts that I was getting about 20-30 unique visitors per day). So, once I had reached that point I figured I was ready to go. After, just a few Facebook posts in both local expat and Chinese groups I had 15 agent/landlord users who were fluent in English posting on my site. That's right: within two (2) weeks of starting it I had 15 landlord users uploading photos and posting their apartment information (and including of course some local expats who wanted to rent a room or their own apartment). It has attracted three links (hyperlinks) back to it without me asking for them. This will further enhance it's SEO, and was part of the reason I built the site (the other being a sample site to show people like you!).

Feel free to register an account youself and test it by uploading photos and trying out the various features it offers a real-estate related business owner/agent/landlord.

Of course I can change and tailor a site to look and perform the way you want it to.
This Site Included: